Deviating momentarily from the relatively long, rant-type posts of late, I'd like to share a few pictures that were sent to me from Ben Schaffer (Bespoke Ventures/Bulletproof Automotive). Ben has proven to be an invaluable resource, not only in the obvious regard of assisting me with parts for my project, but in fueling my enthusiasm, passion, and intrigue into the Japanese Domestic Market, and this industry.

That said, I have been discussing with Ben the next stage of Project G37S. I am looking into changing the aesthetics of the G. I am not married to any particular modification route presently, so it has been fun throwing ideas back and forth, imagining the possibilities, and picturing the potential final product. Consistent with the theme of this project, I am hoping to separate myself from the pack with these future modifications.

Illuminating the road taken with his S2000, Ben sent me the following images. Like many, I had seen this car before. However, the viewing experience is altered now as I reflect upon and consider the different possible outcomes for the G. This car is inspiring, to say the least. 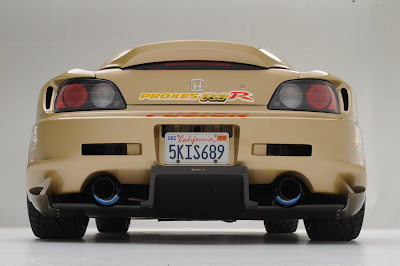 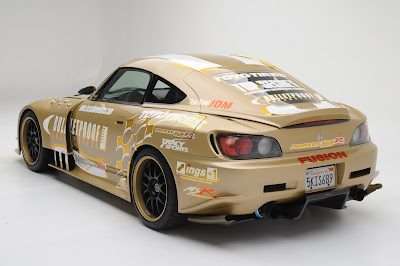 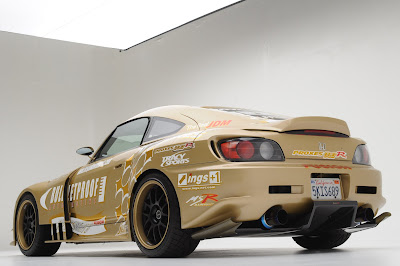 Personally, I prefer this car on the Top Secret Limited Edition TE37's. 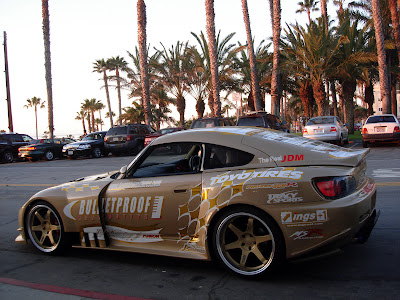 (If you couldn't tell from the pictures, we were discussing what to do with the rear of the G.)
Posted by BP at 9:00 PM No comments:

I come across at least one claim every week on an internet forum where member, JoeIdunno, who has been an automotive modification aficionado for all of three weeks, is making the claim that PART ABC is "the best available" for any given application. I cannot say why I let it bother me, but it does...

Owning a G37, it is only natural that I spend a lot of time on the G boards. Thus, exposing myself to the absurdity and naivete of many misguided G owners. I do not pretend to possess a wealth of knowledge when it comes to modifying cars. I do not have unlimited funding or access to every part available for my car. Therefore, logically, I do not have experience with every part out there and would never make a claim that I could not back-up with some firsthand experience or reliable, factual documentation.

In basic terms, modifying any car is, in many ways, a gamble. Performance, reliability, dependability, and "bang for the buck" are all factors that influence one's decision to purchase aftermarket parts. Sometimes it pays off and sometimes it does not. Sometimes we are satisfied with the end result and sometimes we are not. Reviews on the forums can be helpful, but I have concluded that, more often than not, forum reviews are strongly biased. They frequently involve a member attempting to rationalize, justify, or defend his modification purchase decision. They are hardly objective.

That said, there will always be debate over the superlative, whether it be in terms of sports teams, New York pizzerias, or car parts. When someone makes the claim that PART ABC is "the best," one must speculate to the motivation behind the person making this claim. I recently came across a forum post by a member stating that a certain aftermarket exhaust system is the "Best system available for the G37. Period."

Again, I realize one should take the opinions expressed via internet forum activity with a grain of salt, but some people make purchase decisions based on statements of forum members. In this sense, a forum can be a dangerous resource in which to place full credence and reliance. One cannot know whether there is a fifteen year-old kid hiding behind his computer screen who does not own a car or a seasoned part technician/analyst/researcher making a claim.

To make the statement that this particular exhaust system is the "best" one would have to have firsthand experience with every other system out there, as well as every other combination of exhaust components to go along with that system. Headers, high-flow catalytic converters, test pipes, Y-pipes, etc... It is ridiculous for someone to make this claim. Especially, and this is what irks me most about this particular claim, when the system in question is a clone of one of the more popular exhaust designs over the last ten years. The signature canister design of the HKS Hi-Power exhaust systems is one that this particular company (a company established in the 1990's, over twenty years after HKS) learned was in demand and, consequently, jumped on board the design train.

HKS is a trusted, well-respected Japanese manufacturer of automotive aftermarket parts. A pioneer in the industry. They put in the effort - research and development, tuning, marketing, monitoring customer reception/reaction, quality of product, appearance, and, most importantly, performance. There is a reason they have been among the top names in Japanese automotive tuning and performance for years.

This other company comes along, sees the design of HKS and realizes it's proven. People like it. It will sell. They make a copy of it with cheaper materials, cheaper costs, and sell it for less money. Their exhaust is mass-produced in Korea. The makers of PART ABC is simply a company looking to make a dollar off a consumer who sees two exhaust systems that, initially, look the same, but, in reality, are worlds different. On top of that, this company pays a fee to be a 'Sponsor' on a forum. This allows them to endlessly promote, taut, propagandize, and promulgate their product to a bunch of members who, frankly, are not incredibly knowledgeable in regards to the aftermarket parts industry. PART ABC is only further applauded and revered when the services of a decent photographer are utilized to turn mediocrity into perceived beauty.


Hence, the "Best ever!" comments from the JoeIdunno members of the automotive forums...

Vendor Hypocrisy? Or just par for the course?

I will preface the story I am about to relay by stating that the tone of this post is purely inquisitive in nature. My interest in the JDM parts industry is the motivation behind my questions. I am the first to admit that I do not know everything there is to know about the inner workings of this industry. However, I do know, at the most basic level, it is still a business.


I recently stumbled upon something that piqued my interest...

A thread was created on a forum that included instructions on how to create one's own "Stillen-Quality" grounding kit. (This thread has since been deleted.) The member who created it provided a list of parts used to build these grounding kits and even stated that the instructions included in the Stillen kit could be used to install this newly-created, homemade kit. After investigating this member's forum activity, I found that another thread had been created in the classified section where a "brand new" Stillen grounding kit was for sale, leading me to believe that a kit was purchased from Stillen, analyzed and examined yet never installed, only to be sold later as new.

A representative from Stillen, being a forum sponsor, responded to the member's DIY thread with a post expressing some disapproval at the less-than-tactful approach to advertising these homemade grounding kits. Citing the fact that this garage DIY'er made claims of parallel quality to Stillen's product and boldly included a link to Stillen's installation instructions, Stillen was, understandably, not amused. The terms "copying" and "knock-off" were used by the representative from Stillen in the expression of displeasure.

I find no issue with Stillen being peeved by the creation of the thread. There is no crime in the creation of a DIY tutorial by a forum member for reference by other members. However, by the creator making direct reference to the Stillen kit along with some brazen claims, there is a possibility that a potential consumer reading the thread would opt for the Do-It-Yourself grounding kit over the pre-constructed Stillen product, possibly resulting in a loss of a sale for Stillen.

I have no qualms with Stillen - a few of their parts are featured on my G. This query of mine stems mainly from the intrigue I maintain into this industry and not to any disdain it may appear that I harbor towards Stillen.

To me, this situation seems a bit peculiar for a couple reasons. I can visit Stillen's website and purchase Seibon parts. Seibon copies, replicates, and 'knocks off' the designs of other companies. Stillen puts money in their pockets when people purchase these knock-off parts. It seems to me that there may be a bit of a double standard here. Stillen is perturbed when a forum member shows other people how to build their own "Stillen-Quality" grounding kit and accuse the member of 'knocking off' their product, but they have no problem selling parts from a company who has stolen designs from some of the pioneers of the aftermarket industry. An ironic paradox.

It is somewhat interesting to ponder what the response from Stillen might be if a representative from, say, Top Secret or Veilside contacted them and requested that they cease the sales of Seibon parts because they are copying, replicating, and 'knocking off' their designs. (Granted, the issues of Top Secret, Veilside, and every other company whose designs are stolen should be with Seibon directly. Nonetheless, Stillen is certainly not doing these companies any favors by supporting Seibon.)

I first came across this IND Distribution E92 M3 a few months back and I still find myself staring at these pictures occasionally. I love the overall tuner theme with the bold colors of the TE37's and the aggressive stance. Brembo, Bride, Kressieg, KW, Nardi, Varis, and Volk are just some of the part brands featured on this beautiful BMW. 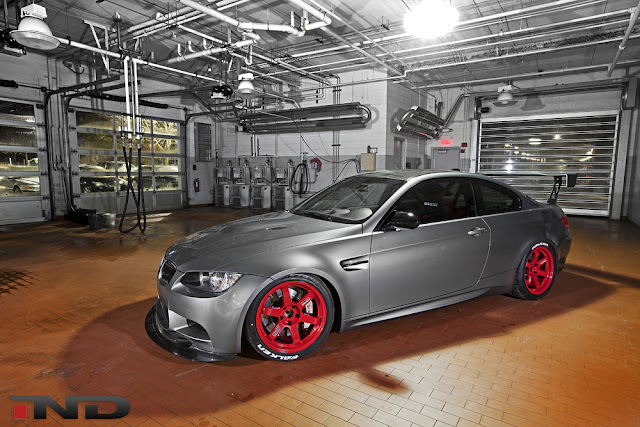 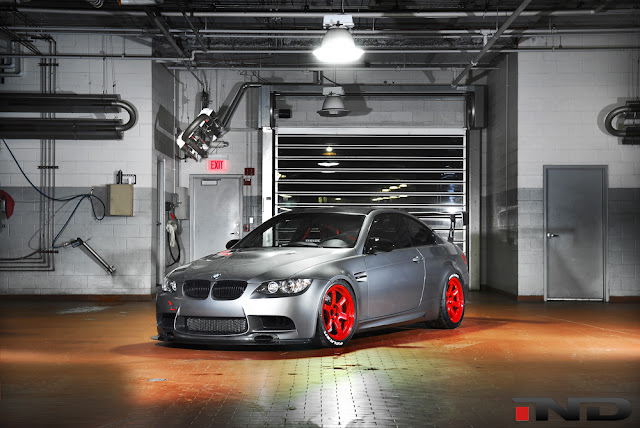 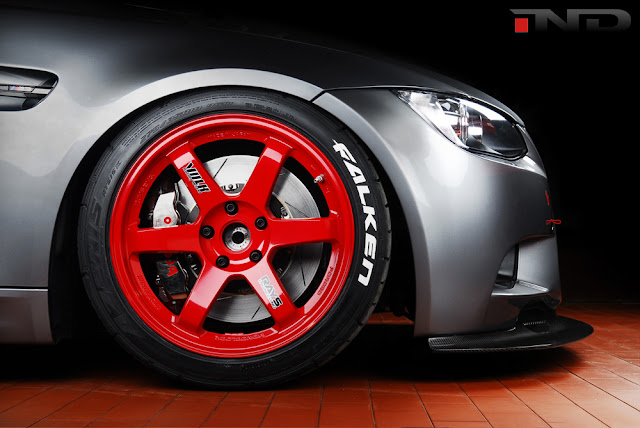 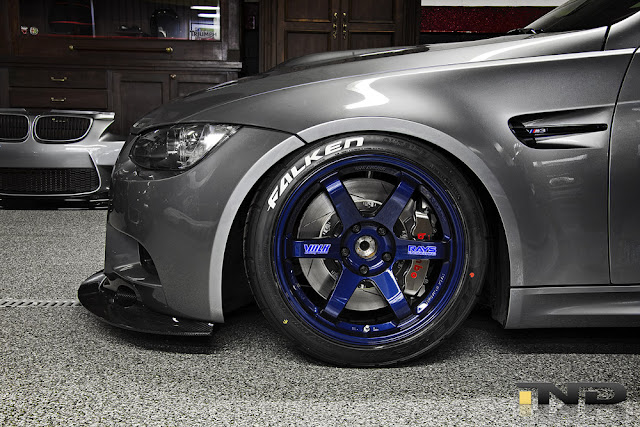 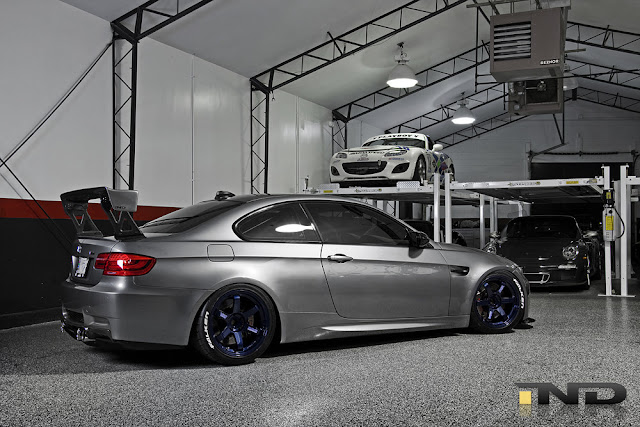 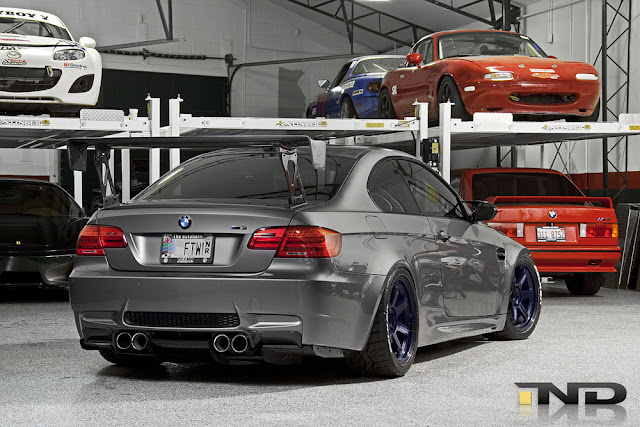 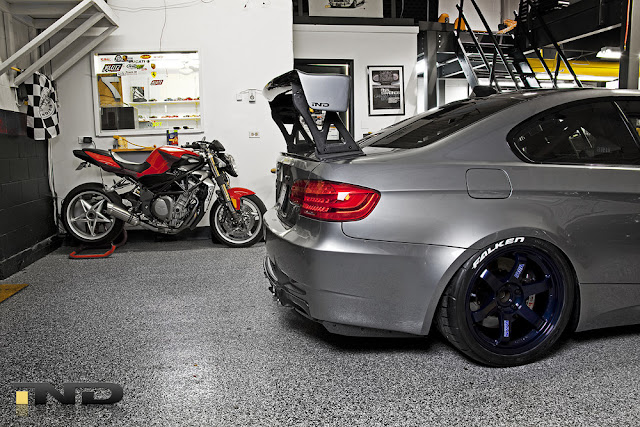 These videos are somewhat comical. Although I think I prefer the previous cartoon I posted (Hellaflush Pwns Joo), this video, from ~3:40 to the end, fairly accurately captures my "purist" sentiments in regards to supporting the true innovators of the industry. 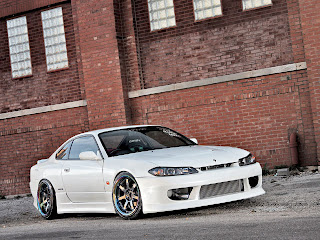 It's not every day that your average Joe is presented with the opportunity to experience the package of luxury and sport inherent in a 1961 Chevrolet Impala. This weekend I was behind the wheel of this boat when the odometer hit 48,000 miles. Not the prototypical driver of a car from this era, I was the recipient of a few double-takes as I floated into the parking lot of a local ice cream shop and dropped anchor. The bench seats, transistor radio, and fishbowl-esque windows are a far cry from the snug Brides, iPod-equipped stereo, and compact, tinted interior to which I am accustomed in the G. Nonetheless, it was quite an experience. 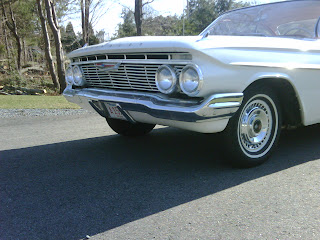 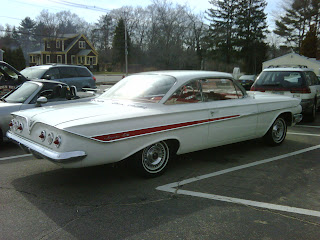 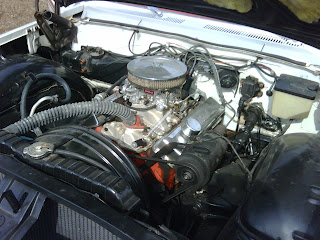 I found myself amused by the size of the steering wheel. (Pictured with my 330MM Personal Neo Grinta) 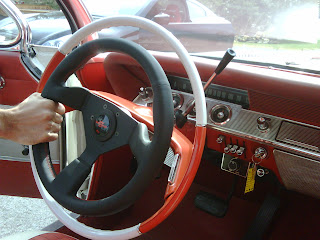 The addressee line of a package I received in the mail a few days ago contained this phrase. Enclosed in the padded envelope was the license plate frame pictured below. I also received the cool Project Mu pedal as a gift from another follower of the blog. There are a few people reading! 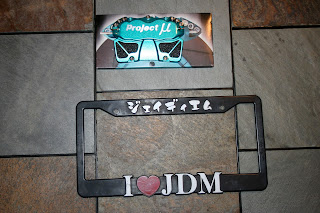 Thank you very much, guys. I certainly appreciate your thoughtfulness, the fact that you are reading, and, of course, your respect for all that is JDM.
Posted by BP at 11:17 AM 1 comment:

Some shots from today...

I went out for a cruise today and found some unique locations. I am not particularly excited about any of the pictures I snapped, but I'll share a few... 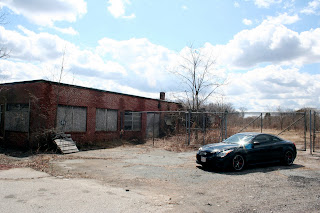 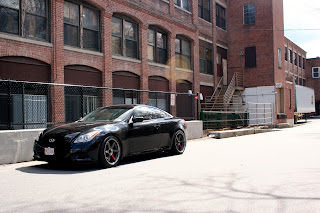 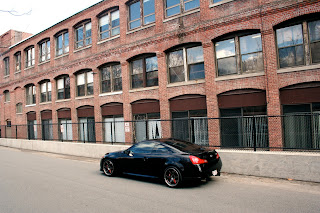 If you don't have something nice to say... 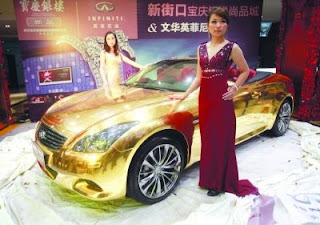 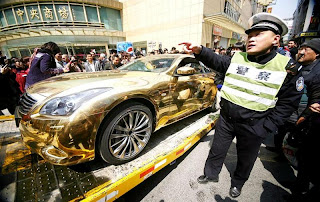 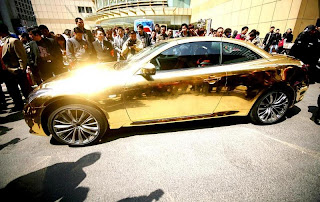 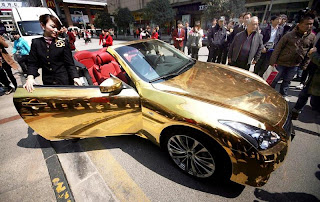 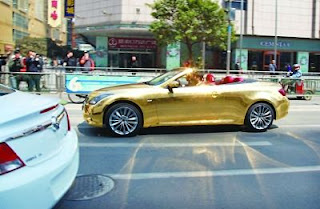