A couple weeks ago I loaded my fresh Mag Blue Volk Racing ZE40's in the M and began my trip to Eastside Motoring in Waltham, MA. As the loyal followers of JDMphasis may know, my buddy Brian has worked on all of my cars for the past 10+ years. I trust Brian with the care of the cars, but I also trust his knowledge and I respect his opinions. On top of that, I know he will never take advantage of me when it comes to pricing. He will give me the best price he possibly can and when he cannot match a price, he is upfront and honest about it. I have followed Brian around from shop to shop over the years. He started working at Eastside about 6 months ago. Thus, I made my first trip over there with the M. 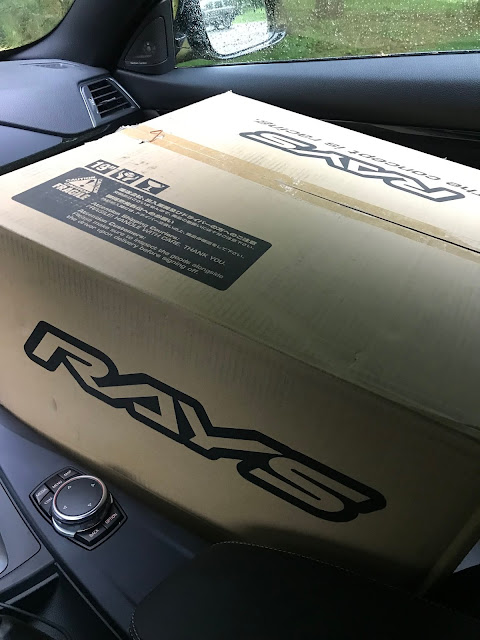 I arrived and received the grand tour. I saw everything from BMW's and Mercedes to Porsches, Lotuses, a Rolls, a McLaren, etc. They work on everything.

My exhaust system had arrived that day, so opening up those boxes was, of course, on the top of my list of things to do. 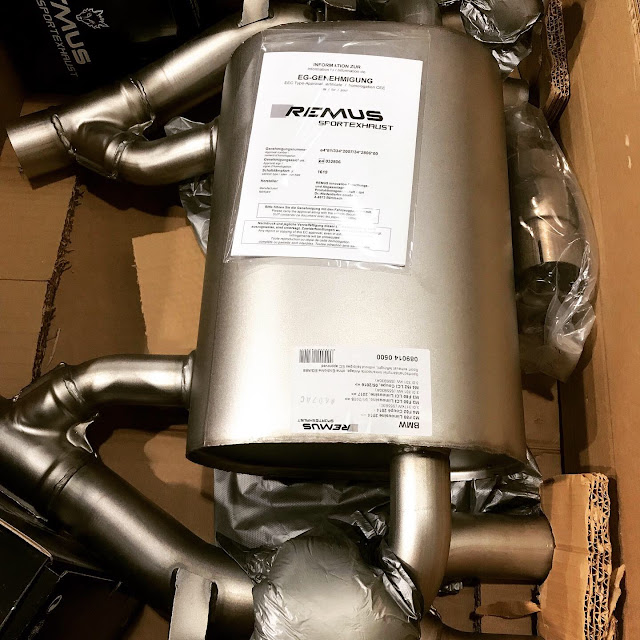 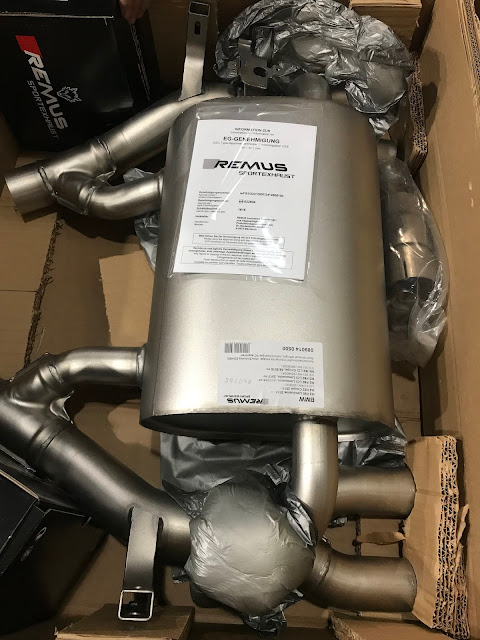 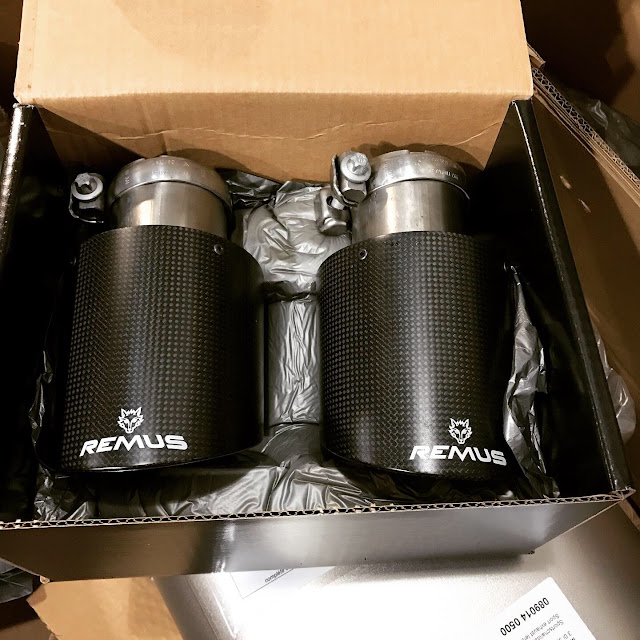 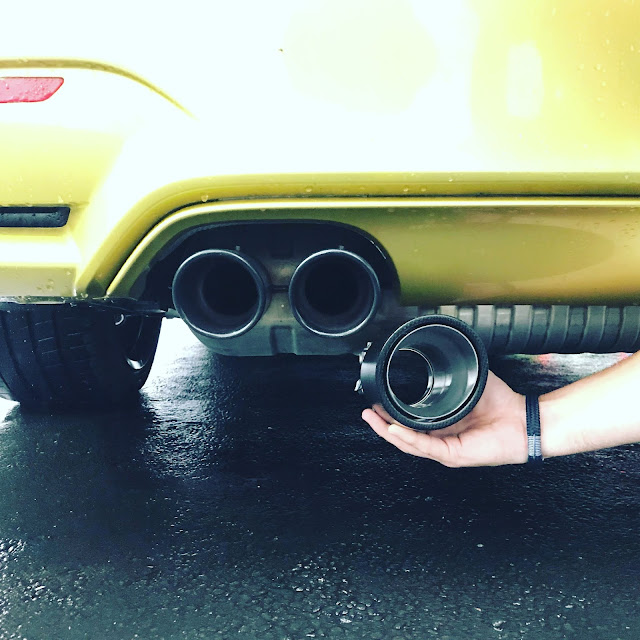 Remus cat-back with 102MM tips. I was stoked to get this system installed. It works with the OEM valve control and I opted for the 102MM tips (carbon fiber) because I believe the OEM tips are just a bit too small. I feel like these tips fill up the rear bumper cut-outs perfectly.

Brian and I then went over everything that we had planned for the car. The car was set to get the new springs installed. I opted for Swift Sport Spec-R springs because of their stellar reputation, as well as my positive experience with them. I have used them on one of my Z's as well as on the SRT. I have had no complaints. Of course, the wheels and tires were on the list, too, as well as an alignment. Installing the IND painted rear reflector set and tinting the rear taillights were two smaller yet quite noticeable modifications on our list, as well. 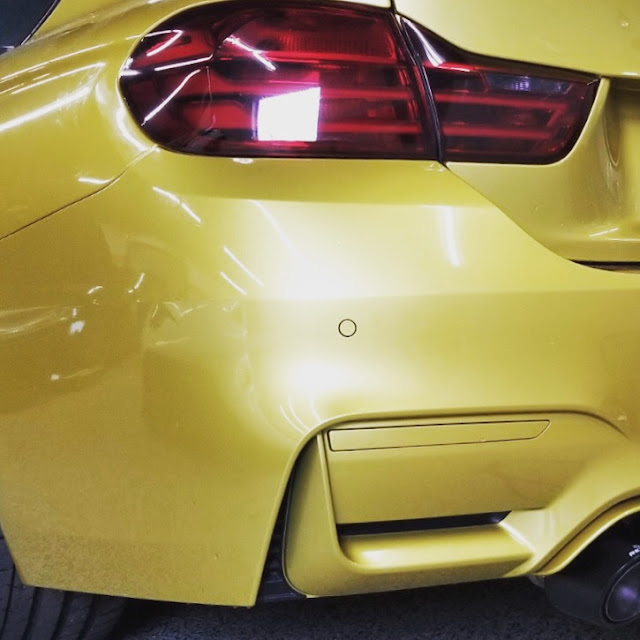 I think the taillights came out nice. If they were any darker, I would not like them. I think the completely blacked-out look is a little tacky and makes the project look cheap. I might have preferred them just a bit lighter, but I cannot complain. They look good. You can see the exhaust tips in this shot, as well. I love them.

The stance. The stance is perfect. The car is not slammed, but it is clearly lower than stock. Aggressive, but not ridiculous and undriveable. (The photo below was taken the day the springs were installed. I believe they have settled just a bit more than shown here.)

Of course, the wheels were the biggest part of this phase of modification. I was really excited to see these wheels mounted on this car. Ultimately I decided on this set of 19" Volk Racing ZE40's, in part, because they actually had them in stock in my preferred fitment specifications. 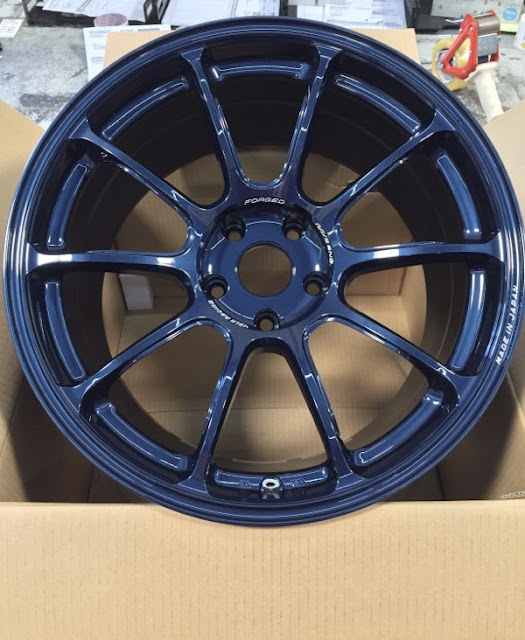 Unfortunately, upon test-fitting the wheels, it was discovered that these wheels would not clear the monstrous carbon ceramic brakes. Apparently there was a misunderstanding when I inquired about these wheels and it was confirmed that I would not have any clearance issues. Needless to say, I was not happy. I reached back out to Vivid and explained the situation. They were able to track down a set of 20" Advan GT rollers for me in the Titanium Blue finish that I had initially inquired about. They are in Japan, but I was told I could get them within 2 weeks (as opposed to the standard 6-8 weeks). The GT is actually the wheel I had inquired about initially, but, when I was told it would take a few months to get them from Japan, I decided to go with the Volk Racing ZE40's.Perhaps the fitment mishap is a blessing in disguise? The GT's should be arriving this week. I cannot wait...

When the new rollers arrive, I will make a decision on tires and get the M back over to Eastside to get them mounted. Pictures will follow. Stay tuned...


JDMphasis... Innovation over Imitation
Posted by BP at 12:00 AM No comments: