As with just about every aspect of life these days, the M4 project has slowed to the pace of a snail. That is okay, though. This is likely the first time in my life that I have had a project with the parts in-hand and ready to go. It is a different kind of anxious waiting. I am now waiting for shops to open and fit me in as opposed to waiting for parts to arrive with crazy delays from Japan.

That said, I was able to drop the M4 off at Sansossio Auto Couture in Natick, MA last weekend for some work. I am really stoked about the work that is being done to the car by Phil Sansossio and his crew. The car will likely not be done for another week, but I have received a few update/teaser shots of the progress being made.

The brake calipers. The M4 is fitted with the Brembo carbon ceramic brake option from BMW. I actually like the gold caliper finish... on just about every car color except Austin Yellow. To me, the colors are too similar, but not close enough to match. I have been irked by that since Day 1 of owning the car. Knowing that I wanted to run Mag Blue/Titanium Blue wheels on this car, I knew I would have a difficult time deciding what to do with the color of the calipers. The safe play would have been to color-match them to the body of the car with Austin Yellow. This was a scenario to which I gave some very serious thought. However, I am a fan of calipers that pop against the body color of the vehicle. If the color of the vehicle is on one side of the color wheel, I am likely to choose the color directly opposite it on that wheel.

I suppose I took a risk. I decided to go with 'Glasurit BMW 5002' - the light blue color in the BMW ///M logo. I chose this because I think it will look good against both the Titanium Blue of the Advan GT wheels as well as the Austin Yellow of the car itself. It is a much lighter blue than the blue of the wheels, so not as to look as though there was any sort of attempt to match the two. On top of that, I believe this particular light blue will contrast nicely with the unique shade of yellow that BMW calls Austin Yellow.

I am really looking forward to seeing them mounted. 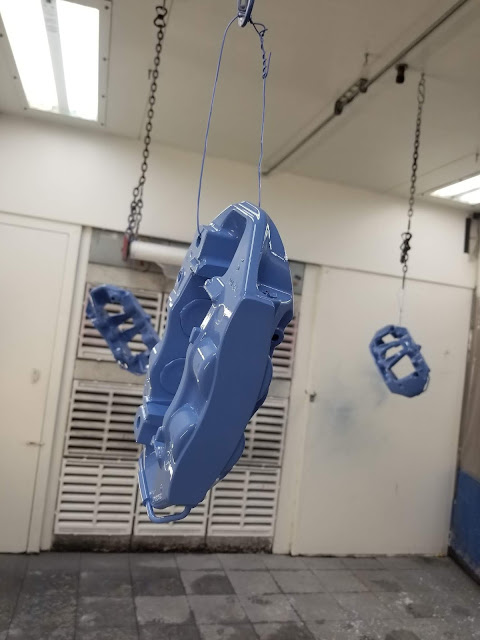 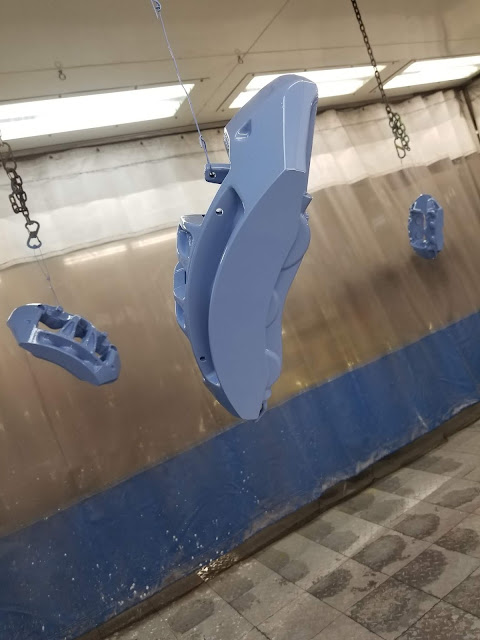 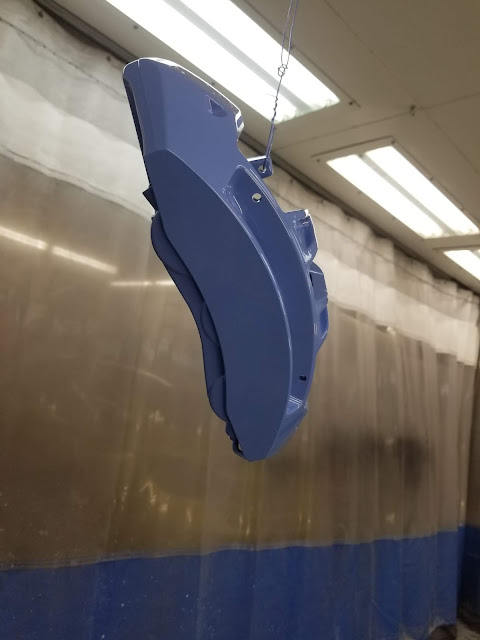 The front bumper. Another aspect of this car that has bothered me since I saw my first M4 is something that I believe would go unnoticed to many non-car people. The reflectors on the front bumper. Eyesores as far as I am concerned. 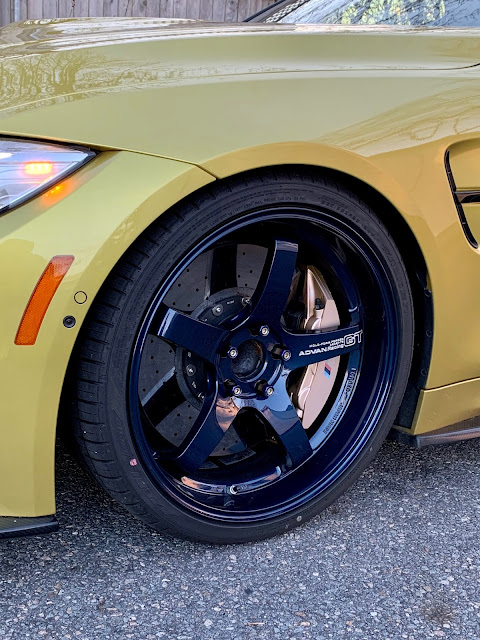 BMW specialists IND Distribution feel the same way that I do about these unsightly reflectors. They sell body-colored inserts. One simply pops the reflector out and pops in the body-colored replacement. These inserts certainly look better than the reflectors, but, in my humble opinion, they are sort of a Band-Aid. I decided that I want to do it right and have the reflectors deleted permanently, leaving no sign that they were ever there to begin with. Phil informed me that most people would not opt to do this. Maybe he is right. And perhaps 95 out of 100 people will look at the front bumper and have no idea there was ever anything different about it. But I will know. I believe the final product will look much cleaner and not distract from the rest of the car. I am actually very excited about this modification. 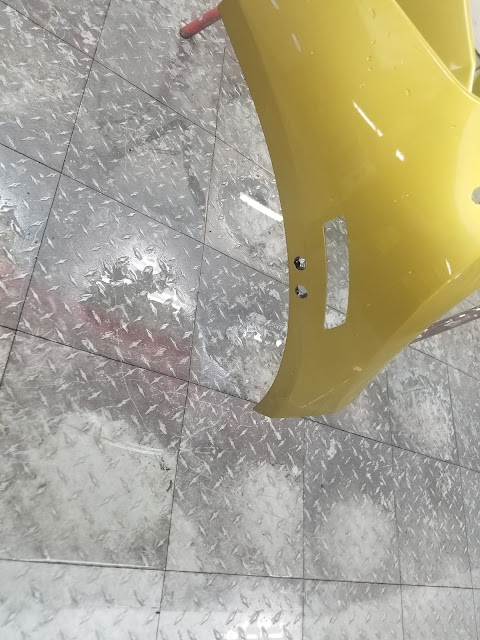 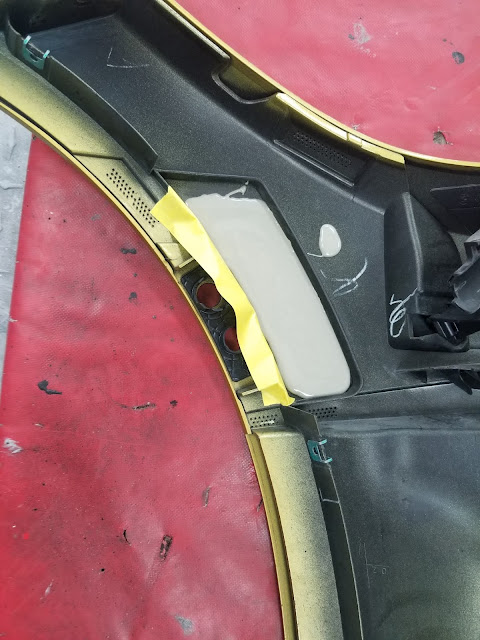 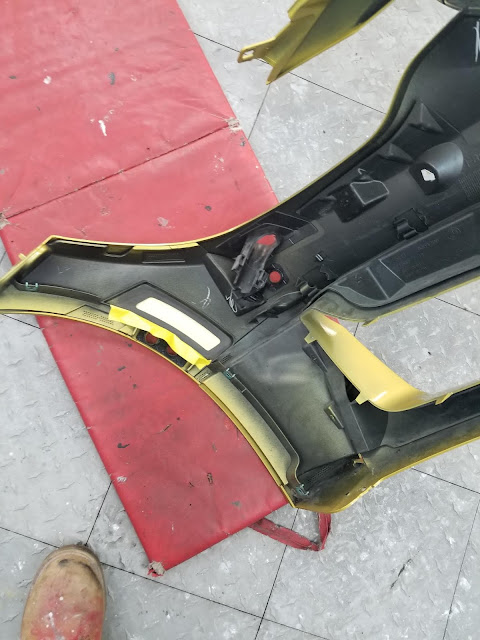 The spoiler. The final area of the car that I asked Phil to address is the rear spoiler. It actually took me a long time to decide on a spoiler that I liked enough to put on the car. I contemplated a few different ideas and made a decision about which I am actually pretty stoked. I do not have any pictures of the spoiler, so you will have to leave that up to your imagination for now. I will say that it is carbon fiber. One thing that I dislike about carbon fiber parts is that sometimes it can look as if they were an afterthought - as if a box was opened one minute and the part was slapped on the car the next. There has not been one aspect of this project so far that I have not spent a significant amount of time debating before making a decision. The spoiler is no different. So, I asked Phil if he could do some paintwork to the spoiler to avoid it looking like "an afterthought," as I described it to him. We discussed a few options and I believe the end result will be worth the surprise...

Once I retrieve the car from Sansossio Auto Couture within the next week it will be going directly into the care and custody of my buddy Brian at Eastside Motoring to address the interior.

JDMphasis... Innovation over Imitation
Posted by BP at 4:30 AM