There have been few posts about the progress of the SRT8 Jeep build because NOTHING has been easy with this project. When I say nothing, I mean absolutely nothing.

Let me start with the issue about which I most recently blogged: my steering wheel. You can read my experience and review here: Caveat Emptor: My Review of Dallas Custom Steering Wheels.


My update to this story is that, after contacting both PayPal and my credit card company, I was told to, first, attempt to rectify the situation with the seller myself. So, I messaged the seller, now, for the third time and again explained my frustrations. At this point the seller escalated the dispute into a claim. I was asked by PayPal what I felt was a suitable resolution to the problem. My position was that I wanted to return the product and be issued a full refund, but that I would be satisfied with being issued a partial refund for half of the sale amount and be allowed to keep the wheel. Long story short, about a week later, I was contacted by PayPal and informed that I had won the claim and that I would be issued a full 100% refund. Boom. One issue resolved.

On to the next…

When I purchased the truck back in January one of the issues I wanted to address was the wheels. I actually love the OEM WK1 SRT8 Jeep wheels, but they were in tough shape with rash and curbing on each of the four wheels. To my surprise (as they are actually extremely difficult to track down), I was able to get my hands on (Well, figuratively…) a set of refinished and professionally powdercoated OEM forged SRT8 wheels. 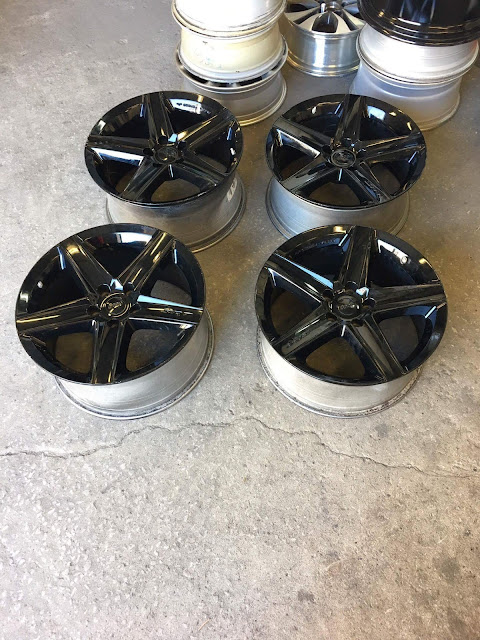 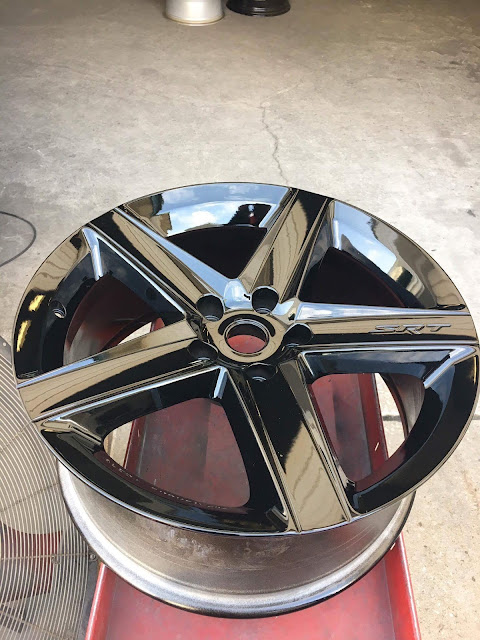 The seller was legitimate. He was an active veteran forum member, active on Facebook in all the Jeep SRT8 groups. I had no concerns. I sent payment via PayPal and was pretty stoked as I had a plan now to mount summer tires on the new wheels with an aggressive 315/35/20 and 275/40/20 set-up and I would keep an all-season set of tires on the damaged factory wheels that came on the truck for the winter months. Win-win without breaking the bank.

"I had trouble finding boxes."

"I am away on business."

"I have been really busy."

"My brother was supposed to ship them out for me."

My next concern is something that I should have discovered prior to driving the vehicle off the lot of the dealership in January. However, I suppose I did not believe it was necessary to confirm that the two headlights on the truck matched. Yes, the headlights, though rather subtle in the differences, do not match. Upon inspection, the lights appear to have been taken from a junkyard and put on the vehicle. My supposition is that the previous owner had, as many SRT8 Jeep owners do, modified the factory headlights and when it came time to sell, decided to part-out and sell them separately. Upon doing this, the cheapest replacements were attained and installed on the vehicle to trade it into the dealership. When I discovered the mismatched headlights and alerted the dealership, they refused to replace them for me. Of course! As I mentioned, nothing has been easy with this project.

I viewed this inconvenience as an opportunity to upgrade my lights while enhancing the aggressive nature and appearance of the truck. I researched some of the people and shops that modify headlights and settled on a company that has excellent reviews, many satisfied customers, and whose products looked top-notch in all the pictures I had seen. I explained what I wanted and they went over a few options with me. We then agreed on a final design. I was sent these in-progress pictures. 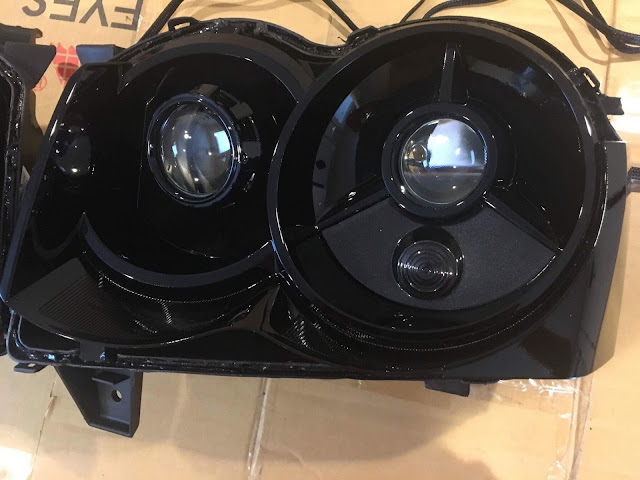 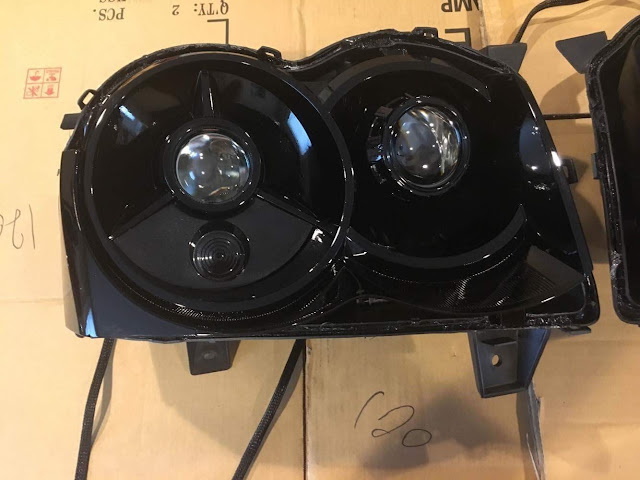 Blacked out. Dual projectors. Demon Eyes. YES! These were going to give the front end of the truck the mean look I desired. Note the past tense there. Were.

I was told these would take "a couple weeks at the most." Almost three months later and... No lights. Seller assured me they were en route and that there was an issue with paint that caused the delay. In the grand scheme of things, this was not a big deal. I was really excited to open the boxes when I finally received them. Then… 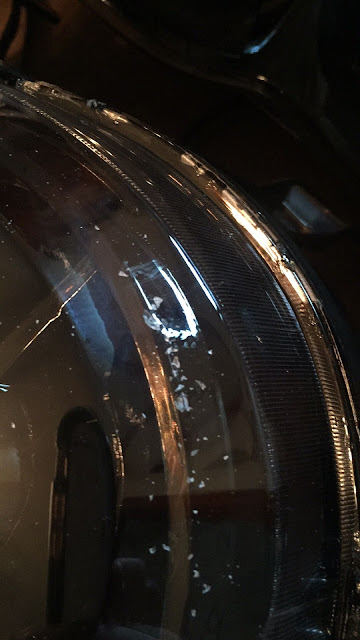 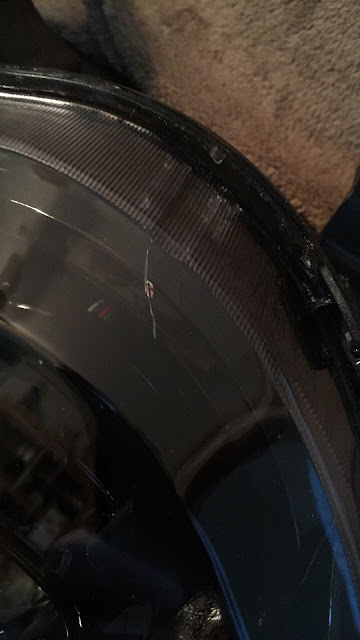 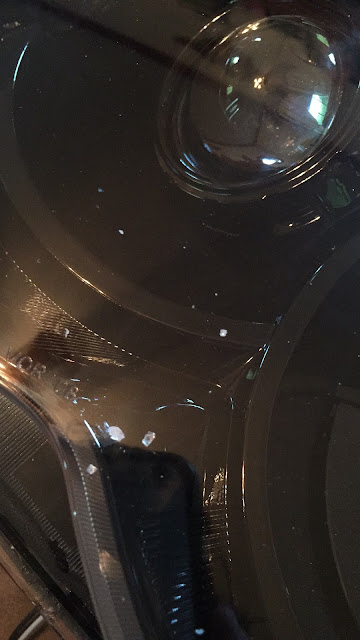 It is somewhat difficult to see in these pictures, but the final product is not nearly as impressive as I had anticipated. Cracks in the housings. Plastic pieces and dried glued "floating" around in the lenses. In short, another headache. I reached out to the seller immediately upon reception and expressed my extreme displeasure and frustration. To their credit, he apologized and offered to make it right for me, which is why I have not revealed the name of the company. I actually just dropped the packages off at FedEx today (paid for by the seller) to have them re-done. As one can imagine, this was not a cheap modification. I was quite frank with the seller and told him that I was extremely disappointed and that I was leaning towards asking for a full refund and just installing OEM headlights on my truck. He asked me if I would give him another chance to "make things right." Hopefully they come through. Time will tell if this is just another issue in the making…

Another update to the truck is some changes to the exhaust. The Gibson stainless steel exhaust system was one of the first modifications we did to the truck. As I mentioned in an earlier post, I had had good luck with Gibson in the past so I was not concerned in buying a Gibson system for the SRT8. However, upon installing it, the tips did not look right to me. One of them was just the slightest bit cock-eyed and they extended about an inch and a half too far out from the rear bumper. 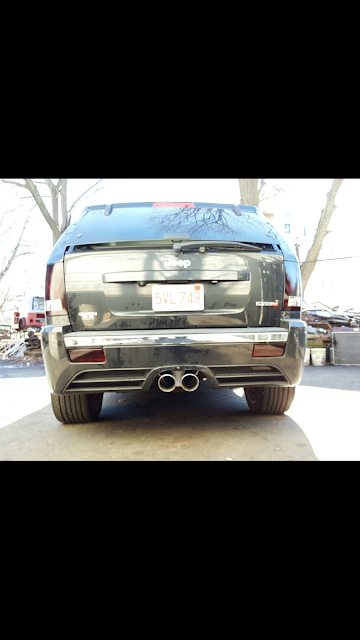 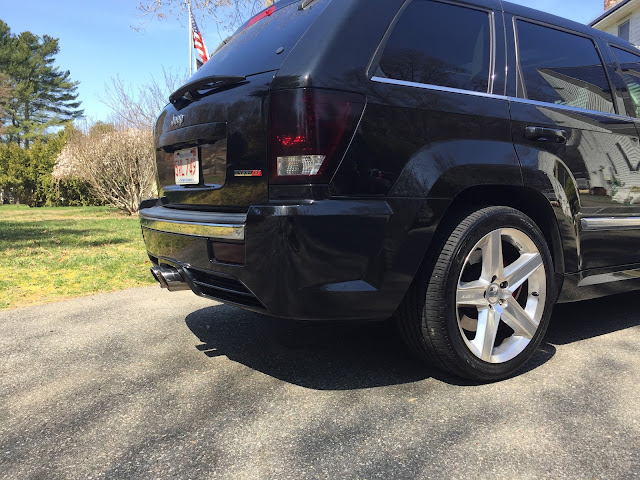 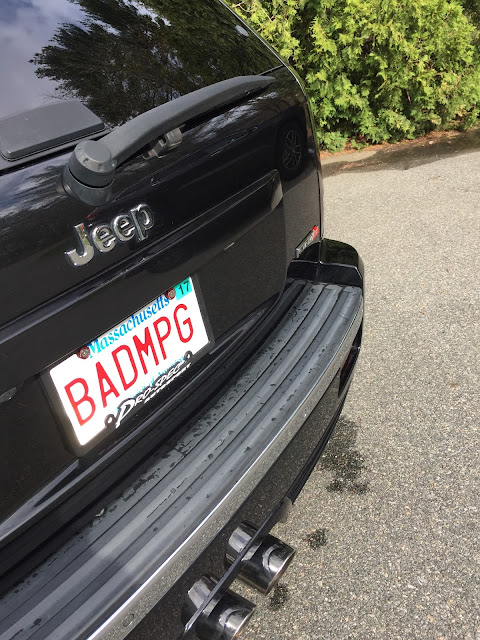 This was not going to cut it. On top of that, I have always believed that the 4" tips are too small for the cut-out of the rear bumper. Once again, I saw an opportunity here. I was able to find some tips that I liked. I needed 3" to 5" to be able to get the look I was going for. I learned that there are not too many exhaust tips out there that are 3-to-5, so it was not exactly a simple internet search. But I found some. Now, I HATED the design at first. It seemed cheesy and tacky to me. I was actually looking into ways of removing the etching or blacking it out so as for it not to be quite so pronounced. 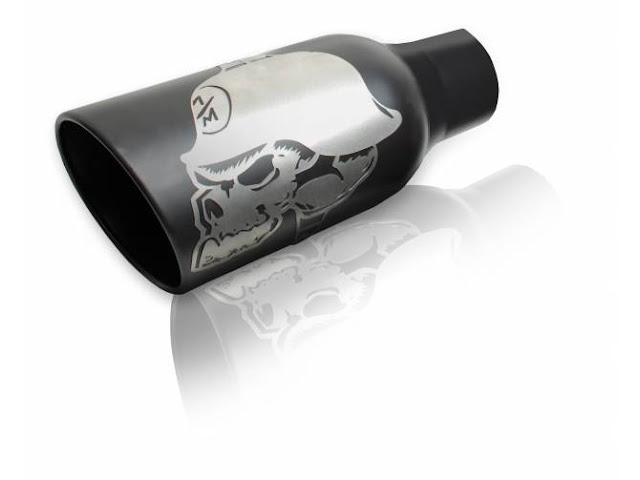 They are Gibson Metal Mulisha tips. I loved the dull black finish and, when I ordered them, I did not realize that the skull image is actually a stainless steel molding and not etched into the tip itself. Believe it or not, the tips have grown on me. I do not mind them nearly as much as I thought I would. They are certainly different.

The next step was to take the tips to a custom exhaust shop and see if they could remove the current tips and install the new, larger Metal Mulisha tips. I anticipated the problem that we encountered. The Gibson exhaust system has two mufflers - a large one shortly after the cats and a smaller one from which the tips extend (labelled 'F' below).

There was really no way to remove the tips that came on the Gibson system and weld the new tips in without modifying the muffler and piping. No problem for my shop. 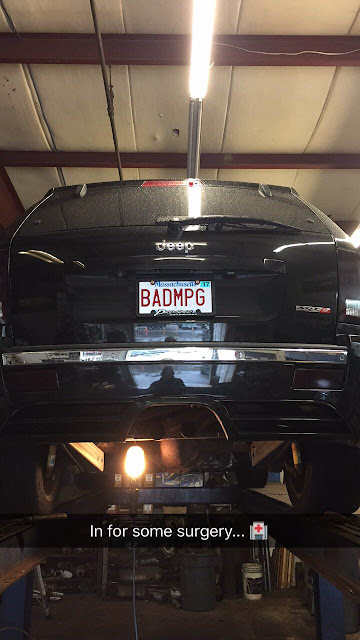 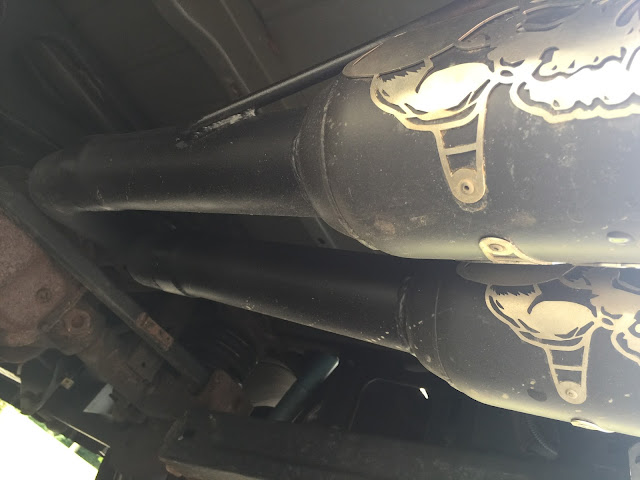 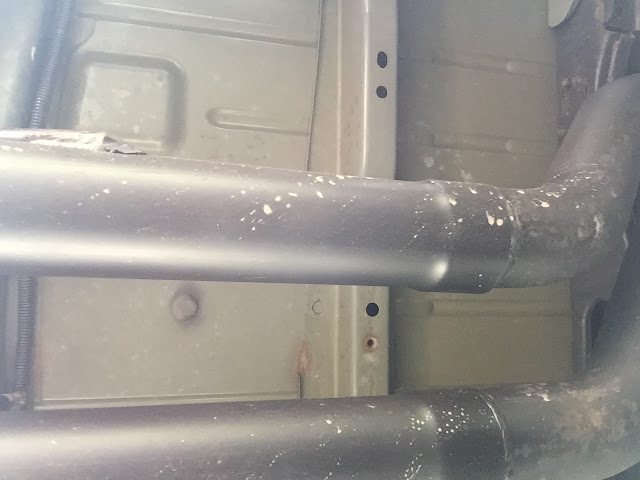 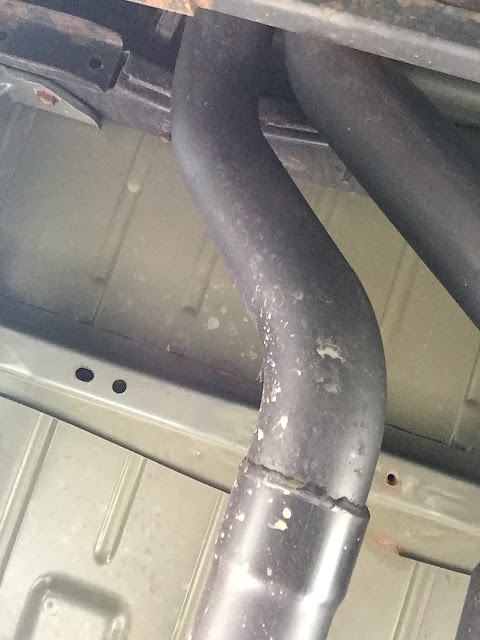 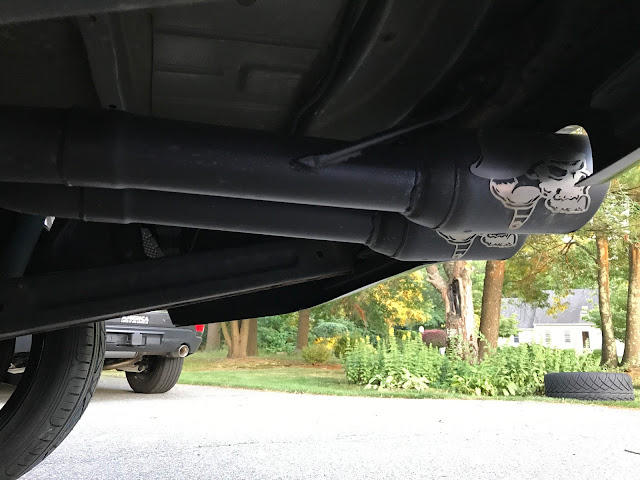 We decided to remove the second muffler completely. They welded in new hangers, fit new stainless piping, and welded on the new tips and aligned them to fit into the bumper cut-out far more precisely than the previous set-up. I not only love the look of the new tips, but the truck sounds like an angry monster.

Another headache… A few weeks ago, I decided to bring the Jeep in for service. Not knowing the history of the vehicle in terms of the maintenance performed by the previous owner, I decided to have all the fluids changed by the dealership. Upon this service, the mechanic sent me these pictures: 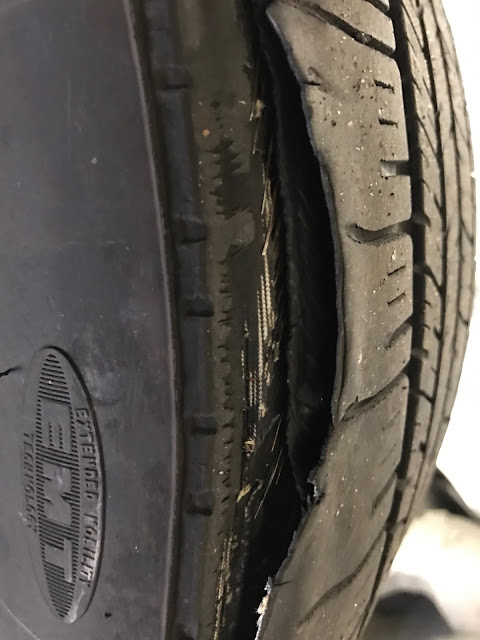 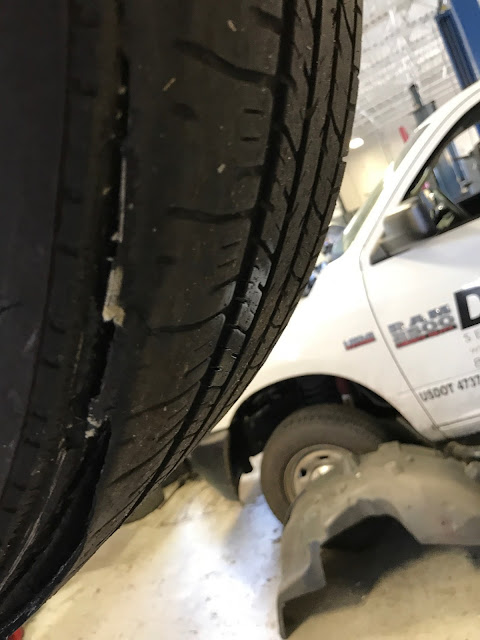 I knew the tires were close to shot, but I had no idea they were this bad… So, on top of a crazy expensive maintenance visit, I had four new tires shipped to the dealership, as well. So, my OEM wheels now have fresh factory-spec rubber. Then, no less than one week later, these arrived: 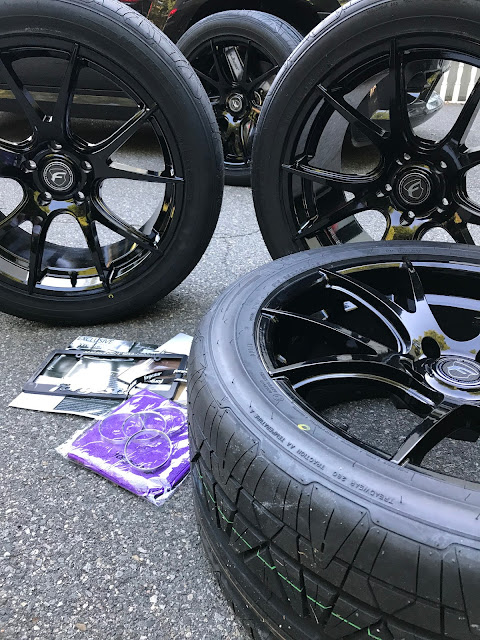 I also ordered a set of rebuilt Brembo calipers and had them powdercoated in an 'Illusion Red' - basically traditional red with an insane amount of sparkle. Of course, even this process could not be easy. The seller forgot to include new Brembo decals with them, so they are en route. 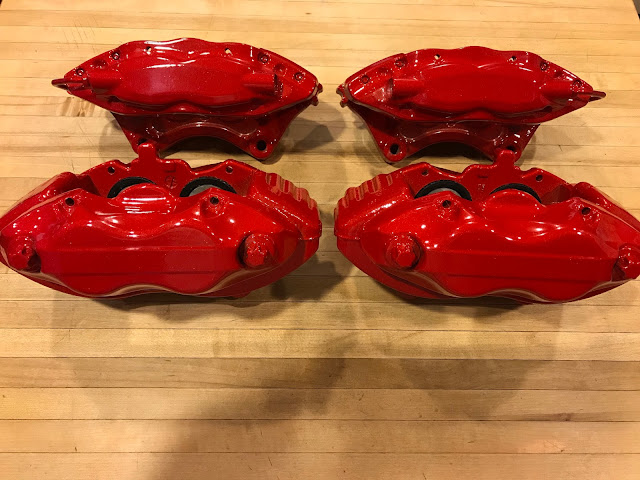 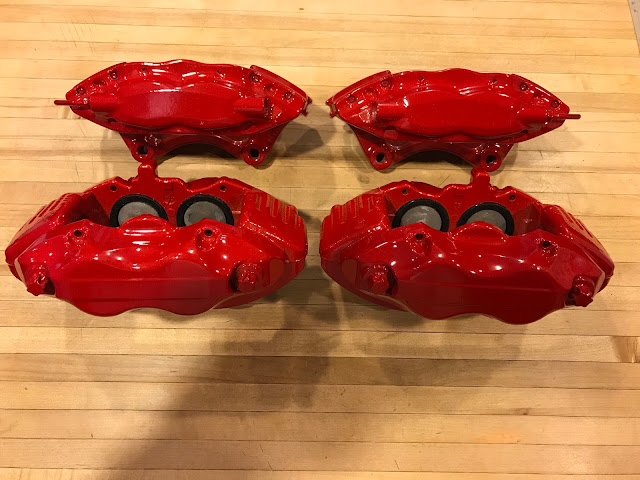 These pictures actually do not do the calipers justice. They look much nicer in person. I would like to install new pads and rotors when I install the new calipers, so I am waiting a little while until my current brakes are a bit closer to death.

Unfortunately, I do not have any decent pictures of the truck as it sits currently. I will try to get some soon. I did snap this one picture today as I looked back at the truck in a parking lot. There is, no doubt, still much to be done, but, given the issues I have encountered, it has also come a long way… Please stay tuned for more. 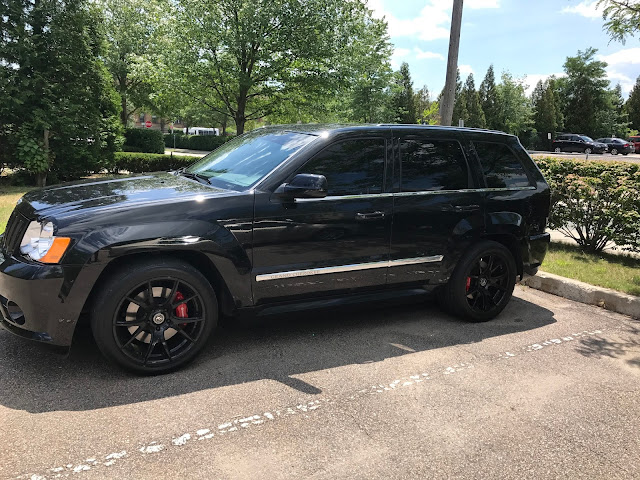 JDMphasis… Innovation over Imitation
Posted by BP at 11:30 PM