Is 'good enough' an acceptable standard?

I have seen much discussion lately about replica wheels. As has been expressed on this subject matter before (and on JDMphasis before), the debate over authentic and replica wheels is one that will not soon be resolved, or satisfied. However, a lot of misinformation is spread haphazardly on the internet and I believe this, like replica wheels, can be dangerous.

I recently came across a thread on a forum in which the thread starter has endeavored to “test,” and I use that term with extremely cautious regard, the structural integrity of replica wheels and see if they are, in fact, deserving of their “bad rap.” The “tests” being conducted by this gentleman consist of mounting them on his vehicle and driving them on the same roads on which he drove his authentic wheels, assuring that his “driving style” will remain constant.

1) Ask a Question Based on Observation
2) Construct a Hypothesis
3) Make a Prediction
4) Test the Hypothesis with Experiment
5) Analyze the Data and Draw a Conclusion.

Now, I should note that I have pared down the thread’s content. This particular forum member’s posts are very wordy. I often have trouble following his stream of consciousness posting. He has also mentioned “performance” as it relates to replica wheels and authentic wheels and has suggested that there is not much difference in results between driving with the two different wheels, as it pertains to his “driving style.” I am not even going to attempt to address this portion of his assertion, as I believe it is not worthy of argument. Without getting into forged versus cast or weight and unsprung weight and whatnot, there is significant scientific data to conclude that there is no discussion to be had here. Forged, lightweight wheels are stronger and, thus, perform better – end of story.

My biggest issue with this “test” is the most important part of any test – the experimentation. There are way too many variables in this ridiculous test. In an experiment there is to be an INDEPENDENT variable, a DEPENDENT variable, and CONTROLLED variables. The independent variable is the aspect that you intentionally change. In this case, the wheels. The dependent variable is the difference in the two parts of the experiment when the independent variable is changed. So, here, it would be the reaction of the wheel to the same testing. The controlled variables are the variables of the experiment that remain the same. For instance, and this is where this “testing” fails miserably, nothing in this experiment is constant. There are no constants. Tires are not the same. Wheels specifications are not the same. Driving manner is not the same, as much as the thread creator wants to say his “driving style” has remained constant throughout. The road conditions are not the same. The roads themselves are far too vast and unpredictable to draw any accurate, real conclusions. In many ways, the fact that I am even commenting on this “test” of replica versus authentic wheels is absurd. Any layperson can see that this is not a reputable, trustworthy, creditable, or reliable test at all. Testing should be done with sophisticated machinery, mechanisms, and equipment. Every single aspect of the experiment should remain the same for each test – the only thing that should change is the wheel – conduct all the tests with the real wheel and the exact same tests with the replica wheel. This way real data and facts can be obtained, not opinion, bias, and external influence.

The thing that surprises (and terrifies) me the most with this forum thread is how many members are praising these efforts and this “test.” It is, indeed, scary to believe that there are many, many people reading threads such as this one giving credence to and relying upon the conclusion of the person behind that keyboard when it comes time to make a purchase.

Yes, every individual is entitled to an opinion. If that opinion is that replica wheels are just as safe as authentic wheels and that one would recommend replica wheels for purchase, I urge those people taking this into consideration to remember that this is not based on anything more than an opinion. Opinions are based upon any number of things, the least of which may (or may not) be fact-based data.

My opinion? Of course, as always, my recommendation is to save your pennies for a bit longer and buy real. If for no other reason, than because you are not rewarding the undermining parasites of the replica world. If that is not reason enough, then I would suggest that you consider the source of your information when you are making a decision on whether to buy real or fake wheels. There is an abundance of information on the internet – some reliable and accurate, some, like this “test,” absurd, false, and fabricated.

Weds Wheels is a crusader for their brand, as they have been ripped off many times by replica wheel companies. Here is a video of some actual tests they did a few years back.


Oh, and then, of course, there is this: 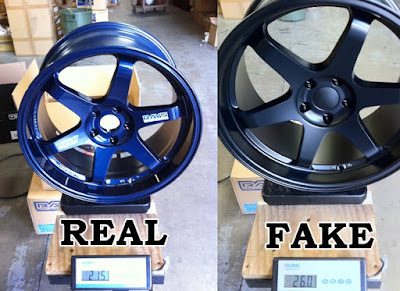