First, a big 'Thank You' goes out to my pal, Ben (Bulletproof Automotive), and the artists of titanium at Power House Amuse for making this beautiful exhaust possible. Secondly, this entire project, going back almost three years, would not be nearly what it is today without the help, guidance, and patience of my good friend, Brian, and the other guys at JT Motoring. Constant communication as well as daily picture updates made this most recent stage of upgrades quite an enjoyable experience, where I was in-the-know, being consulted with every decision. I'm sure I drive both of these guys nuts sometimes, but I hope they know their efforts are profoundly appreciated.
__________________________________________________

Rules? Here are my rules: What can be done with one substance must never be done with another. No two materials are alike. No two sites on earth are alike. No two buildings have the same purpose. The purpose, the site, the material determine the shape. Nothing can be reasonable or beautiful unless it's made by one central idea, and the idea sets every detail. A building is alive, like a man. Its integrity is to follow its own truth, its one single theme, and to serve its own single purpose. A man doesn't borrow pieces of his body. A building doesn't borrow hunks of its soul. Its maker gives it the soul and every wall, window and stairway to express it.

This passage from one of my favorite books, Ayn Rand's The Fountainhead, is a commentary on individual expression and beauty of form. I believe it applies to so much more than architecture. In many ways, the project of an automotive enthusiast provides an opportunity to give it the soul. That project becomes an expression of that enthusiast and, ultimately, finds its own truth; its theme.

It has been quite some time since I have posted any sort of update on the G. That is, in large part, due to the fact that, for the better part of the past year, I have been awaiting the arrival of the new exhaust system. As many of the followers of JDMphasis know, Amuse is my biggest obsession of the Japanese Domestic Market. Put simply, everything Amuse is automotive art. This V36 coupe had the honor of sporting the first Amuse exhaust system to hit the United States (for a V36, of course). I would rather not get into the details of why I felt it necessary to change things up, but I did. (Satisfaction with the product played absolutely zero part in the decision.) That said, I am more than extremely happy with the new system.

To give some background, the conception of this exhaust occurred in October of 2011, when I initiated the first discussion with my friend, Ben of Bulletproof Automotive, of having Power House Amuse build a 'one-off' system for this car. A brief conversation with Amuse took place at the 2011 Tokyo Auto Show in which they confirmed this could be done. At that point, it took weeks to iron out exactly what we wanted to do. On the surface, this may look like a run-of-the-mill R1-Titan system with two extra tips, but that is hardly the case. (We all know there is no such thing as a "run-of-the-mill" Amuse exhaust system.) Every consideration was taken into account during the planning stages of this design, including the vehicle's suspension modifications and acknowledgement of the vehicle's Zele Performance rear bumper. Likewise, every detail was addressed in the initial diagraming of the actual system, from volume desired, to piping diameter, to the degree to which the tips were to be staggered, to the length and diameter of the tips, to the muffler and tip finishes, etc...

When the planning was completed, we had to relate everything accurately to Amuse so they could then begin the prototyping. To my understanding, finding a V36 coupe on which to design and test this system proved a rather noteworthy challenge. Ultimately, Amuse had to resort to renting a vehicle. This whole process, from start to finish, took close to 11 months. Enduring the wait proved to be trying, tedious, and arduous at times. However, I can honestly say, now that I have the exhaust in my possession, it was absolutely worth it to possess a completely custom, 'one-off' system built for me by one of the best, if not the best, exhaust manufacturers in the world.

Truly one of the most alluring specimens of automotive artistry, this exhaust is something that should be on display,  hanging on a wall somewhere, and not hiding under a car. Along those lines, I understand many people will be of the opinion that spending the amount of money this system cost on something that mounts under the car is borderline insane, but to each his own. Whenever I hear those criticisms, I consider a quote across which I came a while back by Apple founder, Steve Jobs.


I acknowledge that there are maybe a handful of people across whom I will come that will actually recognize and appreciate those purple and gold tips peeking out from underneath my rear bumper, but that is not important. I am not building this car for anyone but myself. The quality, attention to detail, and exclusivity are the factors that made the decision to build this system an easy one for me. These are the aspects of this build that, as alluded to in the above Rand passage, contribute to the one central idea; the one single theme, of this project as a whole. I know what has gone into this build. In the end, that is all that matters.

Enjoy a few pictures of this 'one-off' exhaust by Power House Amuse. 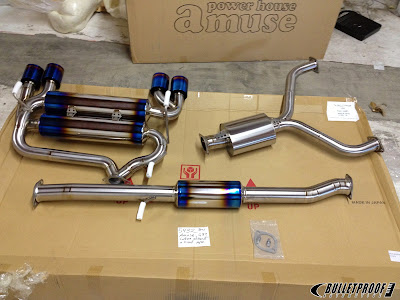 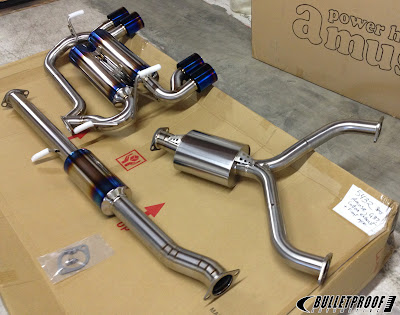 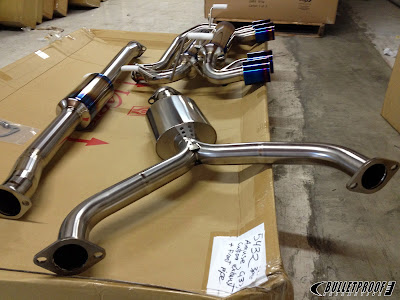 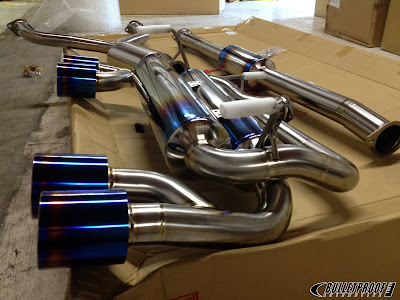 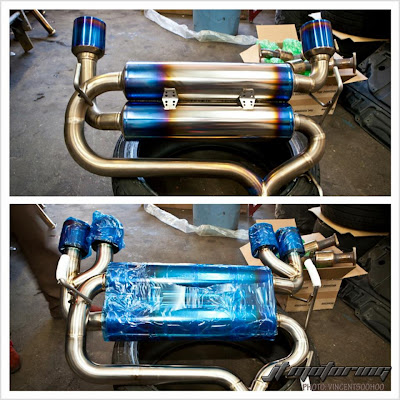 Notice the piping going into the front muffler of the new exhaust system versus the older system. The piping on the older system protrudes just a bit more as it rounds its way toward the mid pipe, where the newer system is more "squared" coming back around the mufflers and into the midpipe. When I ordered the first Amuse exhaust I was warned that I may have to do some minor modification to make it fit due to the fact that it would be the first V36 exhaust to come into the United States and they had not tested the exhaust on a US-spec G37. Due to emissions controls present in the US, as opposed to Japan, US-spec vehicles are equipped with a "charcoal canister" (evap canister) that does not come on the JDM vehicles. That canister needed to be removed to make the first Amuse system mount up properly, as that rounded piping would not clear it. With the new system, that issue was addressed with the piping being more direct and not making quite as big of a loop around the muffler body.

Of course, this custom quad-tipped Amuse exhaust is not something that Zele Performance anticipated when they created their rear bumper, so it had to be modified to accommodate the two extra exhaust tips. I wanted the end result to appear clean, as if it came from the factory that way, so simply trimming the rear bumper was not going to be good enough. We decided to create new "tunnels" in the rear bumper. This took some work. The body shop fabricated a mold and designed the two outlets for the exhaust tips using a metal template that was later fiberglassed once positioned properly and then sprayed. 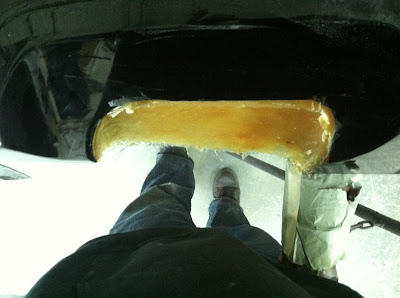 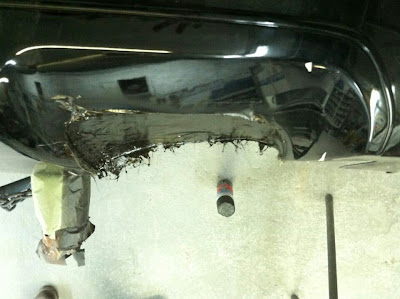 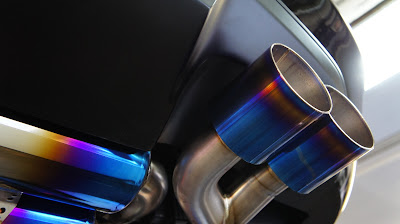 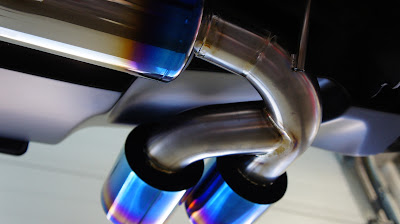 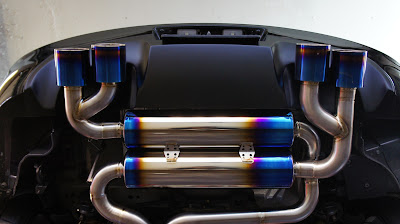 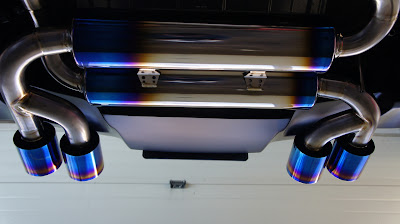 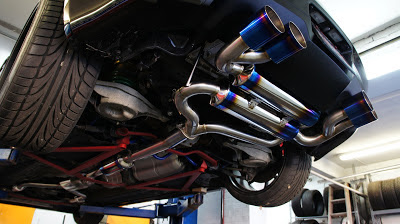 With the rear bumper in the body shop's possession, I decided now might be the right time to address some paint issues with my front bumper. A few imperfections were confronted. Namely, a couple tiny chips spawned from shoddy removal of the bumper by a previous shop; chips that were disreputably covered with the ink of a Sharpie marker. I also used this opportunity to add some matte black accenting to both the front and rear bumpers. I think the contrasting blacks allow the lines of the Zele bumpers to become a bit more apparent. We also added some aggression to the front bumper with a set of First Molding carbon fiber winglets and finally mounted the (functional) Top Secret titanium tow hook.

A couple shots of the contrast between gloss and flat... 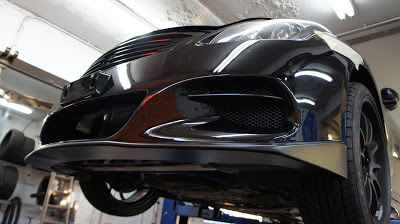 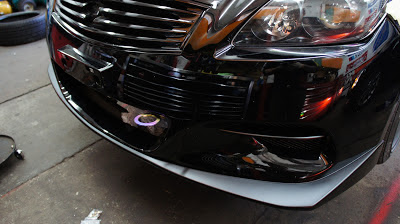 The First Molding Japan carbon fiber winglets were painted black on the bottom and edges and then re-clearcoated. It's all in the details... 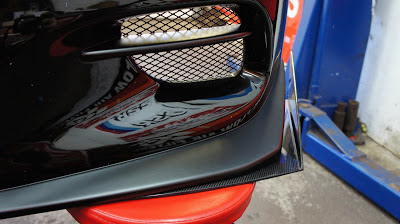 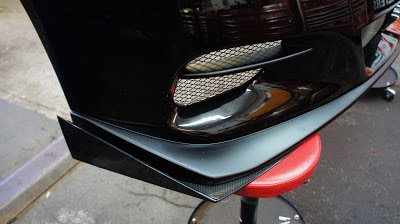 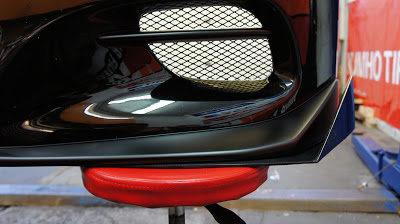 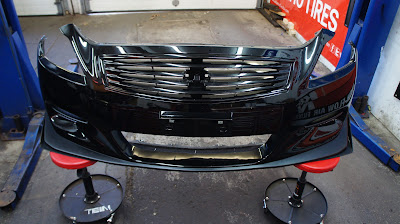 Some other changes during this stage of modification:

There were a few minor hiccups while the G was in the shop that will be addressed next month. We will be swapping out the brake pads, doing a bit more with the engine bay, swapping out the lug nuts, and maybe something else special (and perhaps a bit unexpected). I will also clean the car up a bit. At that point, we will likely do a full photoshoot of the G, which will allow for seeing better these changes to the car as a whole.