One cannot visit a Nissan (and now, likely, a BMW) internet forum to encounter too many members who will not only recognize the username LEEMIK, but who hold it in high regard, as well. Although a bit hyperbolic, it is not much of a stretch to suggest that Mike Lee is somewhat of an icon in certain aftermarket automotive circles. As a car enthusiast, I consider myself modestly fortunate to live in the same state as Mike Lee. My first interaction with Mike came by way of membership to a New England 350Z/G35 forum back in 2005. Later, in 2006, I put together, last minute, the first Northeast Holiday/Charity Meet. It was a small turnout of eight or nine 350Z’s at a local restaurant. Although they were the mechanism that brought us all together, the cars were not the spotlight of this gathering. In fact, I do not believe a single picture was snapped throughout the course of the day. It was more an opportunity to share in conversation and discussion. That was my first occasion to meet, in person, the legend I had come to know by way of internet forums. Today I would not only call Mike a great resource and valuable asset to any automotive community, but a good friend, as well.
The reputation Mike maintains has not come in vain. He has certainly earned his keep within this culture of enthusiasts. With many accolades, awards, and features under his belt for his accomplishments and his bold, audacious endeavors with his vehicles, Mike is a true pioneer. A trendsetter. Often imitated but never topped, Mike Lee has set the bar for many. And set it high. Years later, Mike’s 2004 Nissan 350Z is still referenced daily on one of the most popular car forums on the net, MY350Z.COM, as a model to aspire.

Powered by a pair of Mitsubishi TD05H-18G turbos, the GReddy twin turbo kit provides this 350Z with upwards of 400 horsepower on low boost. Arguably, however, the power of this car is not its most attractive attribute. Upon viewing it, the attention to detail is the facet of this car that leaves most people wiping up drool. It is truly a work of art, not only in form, but in function as well. The parts list for this Z33 is impressive in every way. If Mike’s Z was to play host to a Brand Name afterparty, the guest list would include a Who’s Who? of A-listers such as Amuse, ARC, Bride, Cusco, GReddy, Nismo, Stop-Tech, Top Secret, Varis, and Volk Racing.

The times have certainly changed and the tides have indisputably shifted, as we are now well into the age of Hellaflush/Stanced Z’s occupying every other forum thread and eating up features. It has been a while since Mike has tended to his Z, as most of his attention is now centered upon his e92 M3. However, in a world where it seems as though one out of every five teenagers now owns a Z and are realizing all that is necessary to score some notoriety is investment in a set of wheels, super-stretched tires, and suspension rendering the car hard-pressed to clear a discarded piece of chewing gum, Mike’s Redline Z has stood the test of time. It is still the standard upon which to measure all Z’s. As many now declare the almost twenty year-old Toyota Supras, Mike Lee’s Nissan 350Z is, quite simply, timeless.
Mike is well-known and well-respected among his peers not only for his cars, but for his remarkable photography skill, as well. He captures some amazing images. (I have a few regrets when I consider how I parted ways with my 350Z, but one of my biggest is never making it a priority to have Mike shoot my car.) In the process of selling the Z, I thought it only appropriate to honor Mike's incredible project. Please enjoy a few of his own photographs of it… 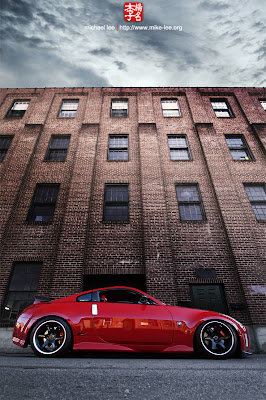 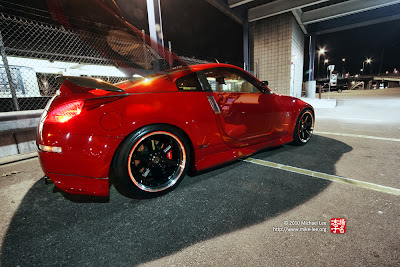 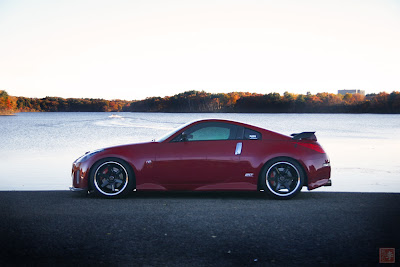 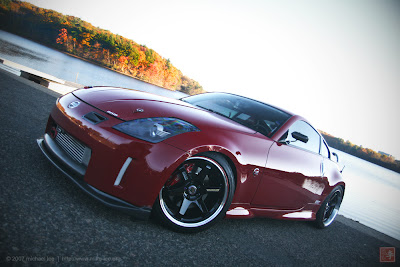 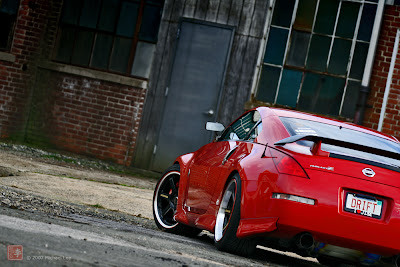 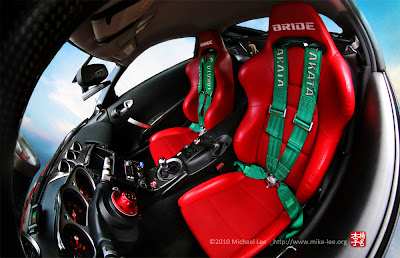