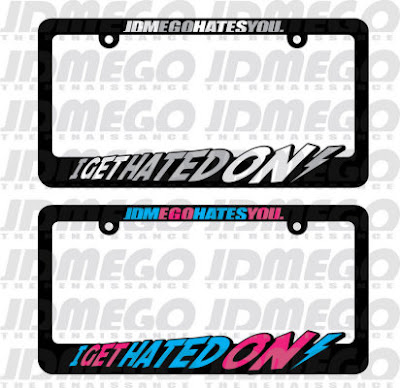 Jay got it right.

The internet is a venue where accountability is scarce. It is a venue that breeds youthful irresponsibility. Yesterday a link to a recent JDMphasis post was shared in a Facebook group of G37 owners. (This post.) There were 65+ comments before the link was removed. I understand that defending authenticity often earns me the misappropriated label of "hater" because I encourage people to support the real innovators of the industry. Some people do not like that. The disdain that follows comes with the territory, I suppose. However, I would argue that the owners of the juvenile, immature comments, slurs, name-calling, and personal verbal attacks on me (and my family!) are the real haters.

It is expected, when posting a picture on the internet, that one is opening the content of that picture up to scrutiny in the form of both praise and ridicule. That is how it works, right? I believe it is fair to suggest that people do not like to be associated with the phrases "corner-cutting" or "faking the funk." They take offense to it and turn the aggression on the person making the accusation, regardless of accuracy. When you cut to the core of it, that is exactly what sporting replica parts is. It is exhibiting a part that is made to look identical to an original.

The fact remains that there is an abundance of corner-cutting cars that we could post up on JDMphasis to ridicule. Logging on to a forum or Facebook is all we need to do. It's that simple. Cars sporting knock-off and replica parts are everywhere! If we wanted to denounce a ride for sporting replica parts, we most certainly could have picked a better one than the G37 in that post (and we probably would have at the very least posted the pictures of the actual replica part). The point of the post was to display the new set of beautiful SSR wheels. The car pictured looks good. The comment about the Zele replica bumper was a footnote to the central message of the post. Just as one is allowed to applaud a car sporting fake parts, I believe I am allowed to have an opinion on the matter, as well, and, for me, adding a fake part to an otherwise sharp-looking ride takes something away from it. That has always been my opinion when it comes to replica parts.

The notion that I have somehow annointed myself as a "JDM God," as one grammatically-challenged comment suggested, is absurd. I have never once proclaimed to be anything but an enthusiast and ardent supporter of the real pioneers of the industry. I have been accused of being arrogant, attention-seeking, and thinking I am "better than everyone else" because I refuse to put fake parts on my car. (Once again, when did choosing quality become a point of criticism? Related Post.) Because I choose to support the talented and skillful companies of the Japanese Domestic Market, that means I somehow believe myself to be superior to those who do not? Really? If I had a completely stock car I would still encourage those people who modify to support the real talent. (Of course, at that point, I have no doubt that I would be at the receiving end of the sophomoric "You drive a stock car. Who are you to suggest how someone should modify?" comments.) It is what it is. I expect it. That said, I thank the people who actually know me and know that I am not a jerk. And I thank the people who support the content of JDMphasis and the central message of the blog: Innovation over Imitation.

As I have stated before, if the parasitic replica companies that steal proven designs are truly the saviors of the aftermarket and do, in fact, make a superior product, as the same commentator suggested, then why do they not enhance the variety in the aftermarket by designing their own aero parts? Why must they ride the coattails of the companies in Japan that have done all the work and taken all the risks? People often wonder why more companies in Japan are not supporting certain platforms by building new parts for them. Is it possible that there may be a direct correlation here?

As for the popular "it's part of life" defense of stealing designs, putting aside for a moment the ethical and moral aspects thievery, ripping off an aero design of a Japanese tuning company is hardly the same as a fake Coach or Gucci purse. It is not the same as a replica Rolex watch. Those companies can and will survive. Many of the tuning shops in Japan are small, for lack of a better phrase, "mom and pop" enterprises, some with barely more than a handful of employees. They are not huge corporations. When their designs are stolen, they really feel the impact. They are then forced to think twice about designing new parts. Insolvency is a very real possibility for many tuning companies in Japan and replicas and knock-offs are a huge contributing factor to that reality. Consider the enthusiast base. People who modify Japanese cars maintain a microscopic percentage of the population as a whole. If people want to say that "having designs stolen and replicated is a part of life," that is fine. I am not debating that statement. I am simply attempting to encourage people to think about the masterminds behind these designs; to think about the consequences of their decisions. I am attempting to encourage people to support authenticity. People do not like to hear it. They are content in defending corner-cutting and labeling me a "hater" for encouraging innovation over imitation. Test it, though. Ask ten random people outside the confines of a car forum if they know who or what Gucci is. Coach. Rolex. Then ask those same ten people if they know who or what Varis, Zele, Do-Luck, and Top Secret are.

My criticisms of cars that support replica companies are not personal attacks on the owners of those vehicles (In fact, the owner of the car in that particular post acknowledged that by privately reaching out to me after the fact. He noted that he understands and respects my opinions in the knock-off/replica debate.) and I do not make a habit of partaking in the name-calling or reciprocating the personal attacks on the trivial grounds that someone's outlook on Japanese tuning does not align with my own. I know replica companies are not going anywhere. I know people will continue to buy those parts and I know those cars will continue to receive praise and publicity. JDMphasis has and will continue to be a means to encourage support of authenticity and discourage corner-cutting. I know that this blog has made me some enemies, warranted or not, but it has also received a tremendous amount of support from readers, followers, and anti-corner-cutting enthusiasts. For that, I am thankful and appreciative.

JDMphasis... Innovation over Imitation
Posted by BP at 12:30 AM