A reader of JDMphasis, in a critique of the blog and our Disillusioned post, in which I take umbrage with Nissan USA for hypocritically featuring a car on their Facebook clad in replica aero, wrote last month:


The blogger is not only angry at the knockoff companies but also at the legitimate companies as well! He is angry at everyone! He does have a point though. Companies are just watching out for themselves. However, if companies only featured cars that were 100% legit with no corners cut, there wouldn't really be much out there.


In a way, this blogger is making my point. My retort would be, if publications, websites, and magazines only featured cars that were 100% authentic and legitimate, then people would be less likely to cut corners. When an impressionable enthusiast can pull a magazine off a rack at the store and see cars landing features that are sporting Rotas, Varrstoens, and every [Insert First Letter of JDM Company Name]-STYLE aero kit out there, of course they are going to think it is okay to fake the funk. It happens all the time. Just browse your favorite LIKEd car pages on Facebook, scroll through the archives of your favorite blogs, there are likely all sorts of cars popping up that are not sporting authentic parts. It's a downfall of the media culture as well as the have-to-have-it-now-and-don't-want-to-pay-for-it mentality of modding enthusiasts. When the number of pictures you can post daily and the number of features you can grind out become more important than the quality of the content, that is bound to happen. Sadly, it is hardly about quality over quantity.

Additionally, I know I would be more inclined to actually buy these magazines if I knew I was going to be seeing the absolute best of the best.

That not unrelated diatribe concluded, I just want to say that Super Street Magazine, without question, got it right with their most recent cover car. I have mentioned Jay (JDMEGO) numerous times on this blog, but if there is any car/owner worthy of praise and publicity, it is Jay. The true OG when it comes to defending authenticity, zero cut corners and unrivaled passion and love for the true innovators of the industry are the central foundation in every meticulous modification of every one of Jay's projects. Thus, a big CONGRATULATIONS to Jay and his crazy Evo for a well-deserved second cover are in order. 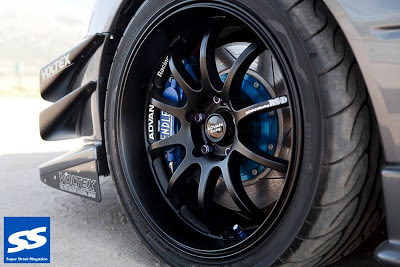 JDMphasis... Innovation over Imitation
Posted by BP at 4:30 PM