The follow-up to Project G37S: Spring is here!

No less than 25 minutes after departing JT Motoring, en route home, surprisingly remarking to myself that I noticed no unfavorable change in ride quality as a result of the spacer install, I was impressed. Driving the G for the first time in months was nice, to say the least. Nearing my exit, I moved from the left lane to the middle lane when the car in front of me swerved. The bud of that swerve was a discarded blown tire resting contemptuously in the middle lane of the expressway. As swiftly as I was able, I swerved, as well. Needless to say, I was unsuccessful in my attempt to avoid the remains of someone's discarded rubber and, thus, it claimed roughly one third of my Zele Performance front bumper, one of my First Molding underwings, the lining of my wheel well, and a number of other parts...

A few shots of the carnage: 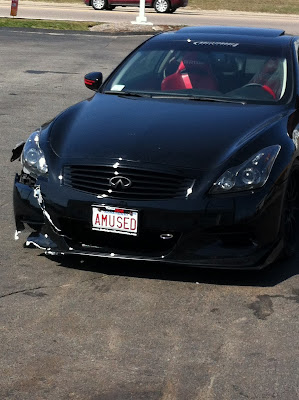 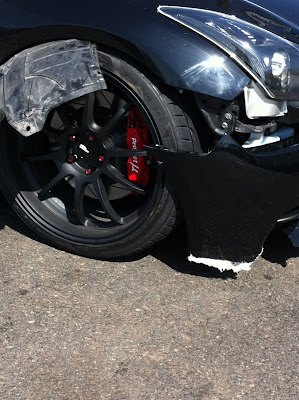 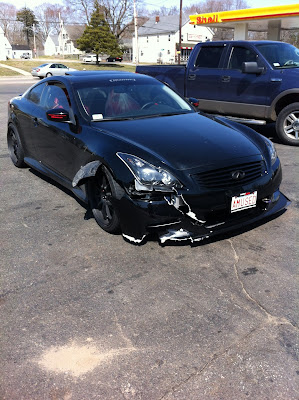 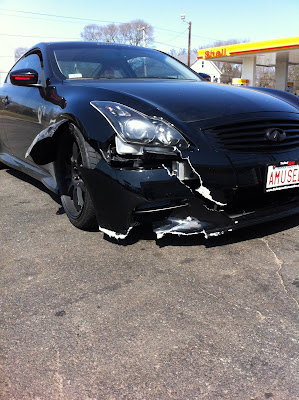 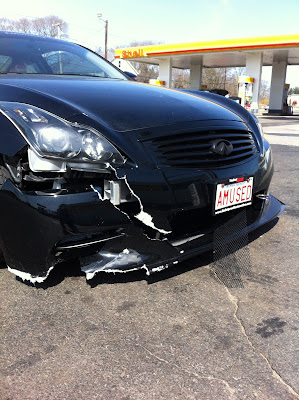 Yes, it could have been worse. Yes, I did not get hurt. I am thankful for that. At the same time, I am quite confident in my suggestion that there may have been a bit of smoke slowly exiting my ears after this incident. I remember an ear-piercing expletive that only I could have yelled, and then, moments later, thinking this could not have actually happened. Mad, sad, frustrated, annoyed, and shocked are but a few of the emotions that came to me all at once. Minutes prior to this I was contemplating what shop to contact for a detail before the weekend meet I have been trying to put together since January. Now I am left combing through receipts and praying that insurance will cover the thousands of dollars in damaged JDM parts. Fingers crossed. I will update JDMphasis as I wade my way through this unfortunate situation.